News, events, tips and updates for members of the Editors' Association of Canada

As passed by a vote of the membership at the 2009 AGM, on July 1, 2010, EAC's membership fee will increase to $250 plus HST for voting and qualifying members and $125 plus HST for student and emeritus members.

The Province of Ontario has agreed to implement the HST, which will replace the existing provincial sales tax and federal goods and services tax in Ontario beginning July 1, 2010. The Canada Revenue Agency will administer the combined tax. Legislation to enact the HST has been passed into law by the Governments of Canada and Ontario.

Because the national office is based in Ontario, EAC must charge 13% HST on services that are delivered by the national association, regardless of which province you reside in.

For more information about HST, visit the Canada Revenue Agency online at www.cra-arc.gc.ca/tx/bsnss/tpcs/gst-tps/menu-eng.html.

Conference 2010 is down in history! Close to 200 editors joined us in Montreal for Reflections: Editing Content and Culture, nearly doubling the conference committee's expectations!

From May 28 to 30, editors from across the country gathered at the Grande Bibliothèque for a weekend of professional development, networking opportunities and (most importantly) fun!

Conference 2010 had something for everyone.

Thanks to all of the volunteers, presenters and attendees who helped to make the conference a huge success. We hope to see you in Vancouver for Conference 2011—Editing in the Age of E-everything.

Photos courtesy of Adrienne Montgomerie (except where noted above). More of Adrienne's terrific conference photos can be found at http://picasaweb.google.com/mont705/EAC2010Conference.

EAC members voted on a number of substantive motions at the annual general meeting (AGM) in Montreal on May 29. The motion to add a Francophone Affairs Director to the national executive council was carried with a round of applause.

Finally, members also voted to strike a committee to study the feasibility of developing a pan-Canadian francophone "trunk" in EAC.

Weren't able to make it to the AGM? You can read the agenda and supporting documentation on the 2010 AGM page. EAC members can expect to see draft minutes of the meeting on the website this summer.

The executive council also includes the following members who are not elected at the AGM:

Most of the association's project and development work is done by national committees of members. The following members were elected to committee positions at the AGM:

The following committee chairs were announced at the AGM and appointed at the subsequent meeting of the national executive council on May 31, 2010:

5. MEMBER NEWS: A round of applause!

The Editors' Association of Canada was well represented at the Alberta Book Awards gala held in Edmonton on May 14, 2010. A dozen or so Prairie Provinces branch members cheered as their colleague Joan Dixon received the James H. Gray Award for Short Nonfiction for her piece entitled "The Perils of War and Mother-Son Relationships." Also shortlisted for this award was Marguerite Watson for her piece entitled "What Grows in the Soil." Joan Dixon was also shortlisted for the Jon Whyte Memorial Essay Prize for her essay, "Embedded on the Home Front," which was published by Chatelaine.

Congratulations to QAC branch member Sandy Newton, co-author of Birds of Newfoundland: Field Guide. The guide was awarded the 2009 Atlantic Publishers Marketing Association's award for Best Atlantic Published Book. Sandy notes that she "wore many editorial hats in the preparation of this book, including researcher, writer, editor and ‘novice birder' test audience."

Member news is a new component of the EAC website and is designed to not only applaud EAC members' successes but also let visitors to the website know that EAC members win awards, publish books and make their mark on the communications world in other important ways.

The national office is looking for member volunteers to proofread national communications. If you have a gift for gaffe-spotting, contact EAC communications manager Michelle Ou for more information.

Are you a message therapist? Spruce up your desk with a new mousepad and keep your mouse tracking properly through all those edits. 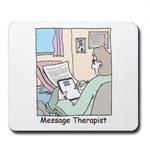 You'll find the message therapist slogan and other fun designs at EAC's CafePress shop. These items are available for sale only until July 31, so be sure to make your secure online purchase today.