So, you've seen the pictures of the national executive council (NEC) hard at work by now, and you have an idea of what we look like as we discuss association issues. Not very exciting pictures, I know. But beneath that unexciting exterior there's lots of neat stuff going on. These quarterly summaries will give you a brief, informal resumé of what we did during the most recent meeting. If you want more info, you can read the official minutes when they are posted. 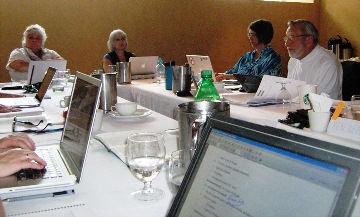 How Many Computers Does it Take
NEC meeting September 2012. Photo by Gael Spivak.

Motions, action items and Robert's Rules of Order make your eyes glaze over and your sweat glands push into overdrive? Well, fear no more: This is your first issue of Executive Briefs, a user-friendly, stress-reducing version of what happened during the latest quarterly NEC meeting. Enjoy!

Members of the NEC are in touch with each other daily through a private email list. We discuss issues, make and vote on motions, and decide what we need to put on the agenda for the next F2F quarterly meeting. Then we spend one-and-a-half to two complete days locked in a hotel conference room discussing matters that affect you, the members, and make your membership experience more satisfying. The meetings are chaired by your NEC president (this year it's Greg Ioannou), and I can attest that the discussions are lively, interesting and thoughtful. The highlight of the weekend is always a Saturday night get-together with local members organized by the branch. This gives the NEC a chance to meet members from across the country and keep current with their issues.

On Saturday, September 22 and Sunday, September 23, the NEC met in Montreal for their Q3 (third quarter) meeting. We started off with an orientation session for new council members (elected at the AGM) led by Carolyn L Burke (executive director) and Michelle Boulton (past president). Stuff like how meetings are run, confidentiality, voting procedures and the importance of executive reads.

Psst… Did you know that most official EAC communications (such as our E-news Update) have to be read for content by three members of the NEC before being copy edited and distributed? Sometimes communications are passed as is, and sometimes there are comments and requests that are passed on to Michelle Ou (national office communications manager).

Next on the agenda were all the reports submitted by the executive director, portfolio directors, taskforces and national committee chairs. Some reports raised issues the NEC needed to look at or take action on, and we went through these requests individually.

We discussed various issues, such as opening up the Fairley Award to other types of publications and creating a separate award for French-language editing; the most effective way for outgoing NEC directors to hand over the reins to incoming members; the feasibility of making conference content available online to members; and implementation of our strategic plan.

Day 2 started off with a presentation from Michelle Boulton on re-branding EAC and an explanation of the terms "logo," "brand," "visual identity," "corporate image," and "corporate identity." We want all of these to represent our members and what they do. But the best representatives of our members are… our members. Each member is a walking advertisement for EAC, from their professional interaction with clients, to the way they greet new arrivals at branch meetings. This is where "branding" starts, at the individual member level, and it's so much more important than the colour of the logo or the content of our mission statement.

After the break, we turned our attention to the annual national conference. First of all, training and development director Ken Weinberg wowed us with a PPT presentation prepared by the 2013 Halifax conference committee giving us a sneak peak at what awaits us in Halifax next June. The theme and visual for the conference were approved. Keep an eye out for the conference committee's official announcement—you'll want to make your travel arrangements right away!

The 2013 Conference Committee was wondering how many French sessions to plan. We hope this conference will draw a good number of francophone members because of its proximity to Quebec, so the answer was: as many as possible! We discussed our method of choosing host branches for the conference as we move forward. In the past, the NEC has decided where to hold the conference and then approached that branch. We are hoping that the branches themselves will now have this discussion and decide among themselves which branch will host upcoming conferences. Who is better placed to assess the readiness of a branch, in terms of resources and interest, to host a conference than the branch execs?

And finally, we discussed the ramifications of social media on the organization. Things like our logo: it is illegible when reduced in size for use on Facebook, etc., so a "social media" version without the organization's name in full was needed. Also, with the proliferation of Facebook pages, LinkedIn, blogs and Twitter, who is authorized to post where on EAC's behalf? Which committees, branches and twigs? Michelle Ou will work with the national marketing committee to put together guidelines on who can do what with our social media.

Another busy weekend wrapped up with a satisfying sense of accomplishment. Stay tuned for the next instalment of Executive Briefs following the December 1–2 meeting in Toronto.