Edition is only available in PDF and requires Adobe Acrobat Reader to be viewed and printed.

Visiting China: I saw the signs

Wordplay: At the end of the day

Five ways to improve your productivity

Getting twiggy with it

Reports from The Word On The Street

The best editing and writing advice I ever got 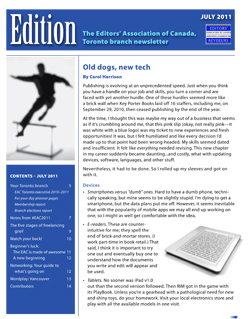 Editing in a tech world

Notes from the 2011 conference

Beginner's luck: Backing up your system

Apps for editors on the go

What does Bill C-32 mean for editors?

Is editing harming your health?

What do you do when life gets in the way of your career?

Beginner's luck: Learning when to say "no"

Grammar food for thought: An editor’s observations on grammar and usage

Grammar food for thought: Figures of speech that don’t work 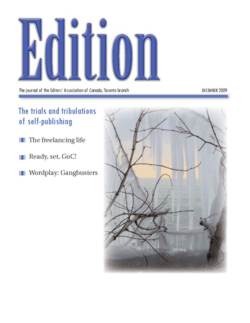 Past program report: The trials and tribulations of self-publishing

Past program report: Tips of the trade

A pictorial snapshot of Word On The Street

Past program report: An insider's view of the production department
Upcoming seminars 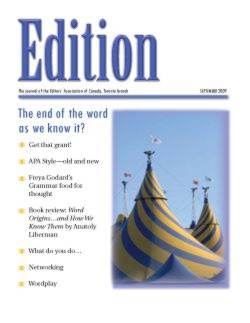 A preview of the fall seminar lineup

The return of the Networking column

Book review: The Surface of Meaning by Robert Bringhurst

Members’ Corner: What does EAC mean to you?

Book Review: On the Dot: The Speck That Changed the World by Alexander Humez and Nicholas Humez 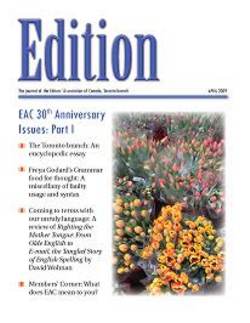 An encyclopedic essay on the Toronto branch

Members’ reflections on what EAC means to them

A review of David Wolman’s Righting the Mother Tongue: From Olde English to E-mail, the Tangled Story of English Spelling.

Style Tips for Academic Authors and Their Editors

Branch executive reports and a message from the EAC conference organizers

Past program report: The Canadian magazine industry. A panel with Penny Caldwell, Craig Saunders, and D. B. Scott

Laughable language: A review of June Casagrande’s Mortal Syntax: 101 Language Choices That Will Get You Clobbered by the Grammar Snobs—Even If You’re Right

Feature article: Before we were editors

Past program report: Sometimes editing reduces you to tears

Why we procrastinate and how to overcome it

Coping with jobs you don't enjoy

Freya's grammar column: that and which reconsidered

Review of The Prodigal Tongue: Dispatches From The Future of English

Reflections from Editing in the Global Village

Past program reports: Transitioning to new media & the year-end party in pictures

The view from the new branch chair

Review of Treasure-House of the Language: The Living OED

Results of the 2008 executive elections

Foreign languages in an English text

Past program report: Copyrights anyone?

Editing on-screen versus editing on paper

Book review: The Artful Edit: On the practice of editing yourself

Past program report: Finding a niche

How the EAC e-forum rescued me (again)

The Online Directory of Editors

Past program report: Freedom of expression

Problems with the colon

Should You Become Certified?

How to Beat the Winter Blues

Freelance versus in-house: pros and cons

A meeting of minds: Globe and Mail obituary editor presentation

Professional Development: February 2008 Seminars
A review of books: What do our executive board members use?

Past Program Report: 'Cover Your But': A Report on Why and 'Error' Isn't

Who I Am as Editor? Reflections on Identity

A Review of Books: What Executive Members Are Using

A Brief History of EAC

Book Review: The First Man in My Life

As Good as it Gets

Make the Most of Your Hired Guns

In the News: Toronto Branch Member Passes Away

How to Read a Novel

In the News: Why Are First-Rate Novels So Rare?

On reading as a writer

Insights into the Publishing Process seminar

Program report: The pain and pleasure of editing (Audio)

The Word on the Street: Toronto and Kitchener

A room full of strangers

Once upon a time at Eden Mills

The Renaissance Soul of an Editor

Diary notes from the EAC 2006 conference in Vancouver

Introducing the power of podcasting

Is e-mail eating your precious time?

Program Report: Magazines and the Web

How to Get Published

Is the Canadian Freelance Union for You?

Industry Briefs: The State of Crime Fiction Writing in Canada 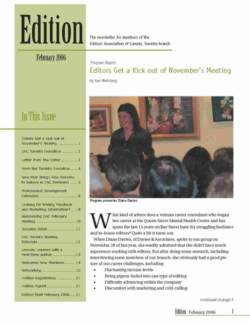 Program Report: Editors Get a Kick out of November's Meeting

Lessons Learned with a First-Time Author

The Word on the Street Festival

My Experience at the Humber Creative Book Publishing Program

Editing is a Bloody Trade