Toronto, June 22, 2020—Greg Ioannou of Toronto, Ontario, is the winner of the 2020 Karen Virag Award. This award, which comes with a $400 prize, recognizes exceptional efforts by an individual or organization to raise the profile of editing in their community. Virag, a highly accomplished member of the Editors' Association of Canada (Editors Canada), died in 2014. Ioannou donated the prize money back to Editors Canada. 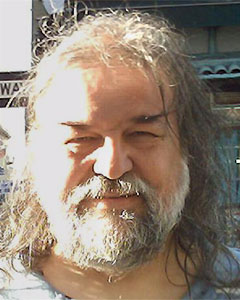 The chances are, even if you don't know Greg Ioannou personally, you know of him, so prevalent is his presence and leadership as an active volunteer in the editing world. He brings editors together as a group and provides mentorship to individuals. "He sees other editors not as competitors but as colleagues who collectively make our profession stronger," said his nominators.

Ioannou's accomplishments have wide-ranging effects. He created the Editors' Association of Earth (EAE) Facebook group in 2013, as a way to connect editors worldwide. "The EAE has done wonders to raise the profile of editing as a career," continued his nominators. "More than 10,000 international editors have a place where they are validated as professionals, a place where they can ask questions, locate resources, share ideas, find work and make friends."

It seems natural for an online group of editors from around the world to come together in real time for an international editors conference. But it was Greg's vision, once again, that in 2015 brought to Toronto approximately 500 registrants and speakers from more than 20 editing and writing associations from around the world. Editors Canada was to have hosted the second international editors conference in Montreal this past weekend; however, the association cancelled the event in March in response to the COVID-19 pandemic.

Ioannou's nominators summarize his volunteer work as follows: "Greg has been enriching the editing community in multiple ways for more than 40 years. A founding member in 1979 of the Freelance Editors' Association of Canada (now the Editors' Association of Canada), he's played key roles on the association's executive (four times as president, six times as treasurer). He is the current director of training and development, which is fitting considering he's taught editing to hundreds of students since 1982. Greg has also provided valuable on-the-job training for about 60 people through his intern program."

Ioannou has been a freelance writer and editor since 1977 and, more recently, a publisher and crowdfunder. He owns and runs the writing and editing company Colborne Communications and is the president at Iguana Books. Over his career, he's edited more than 3,000 books and has written everything from board games to annual reports.

Three respected Canadian editors made up the selection committee for the 2020 Karen Virag Award.

Lenore Hietkamp is an editor and an artist. She works on books, both fiction and academic, from concept to finished product, and journal articles. She makes sure her schedule includes time to paint portraits of people and animals.

David Johansen has been a freelance editor for many years, specializing in government and academic papers with the occasional foray into editing music—an interesting challenge. As a relief from spotting dangling participles and split infinitives, he enjoys singing with the Lakeshore Light Opera and the Cantabile Chorale.

Marie-Christine Payette started her own business in 2011 and offers the following services—English to French translation, editing, proofreading and comparative editing. She volunteers a lot within Editors Canada (e.g., spokesperson, speaker, director of francophone affairs). She received the association's President's Award for Volunteer Service in 2018.