Toronto, June 12, 2017—Virginia Durksen of Calgary, Alberta, is the winner of the 2017 Karen Virag Award, which recognizes exceptional efforts by an individual or organization to raise the profile of editing in their community. The award comes with a $400 cash prize and is named for a highly accomplished member of the Editors' Association of Canada (Editors Canada) who died in 2014. 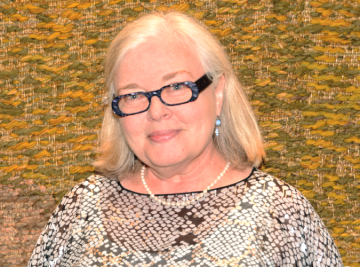 Durksen's career began more than 25 years ago. She started out as an editor and still takes on editing assignments, but over the years she has also become a teacher, public speaker and writer. Throughout her career, she has constantly promoted the editing profession: what it is and why we need it.

Today, Durksen's core business is teaching writing and editing courses and workshops to corporations, government departments and various agencies. Through her work, Durksen invites workplace writers to "discover the power of clear words." Students in her courses learn that they can and should edit their texts—by themselves, by asking peers to review them or, best of all, by hiring a professional editor.

Outside of the classroom, Durksen is perhaps best known to radio listeners as one half of the Grammar Gals duo. Together with Virag, Durksen proposed and then participated in this regular call-in show for Alberta at Noon on CBC Radio One. Listeners across the province phoned in with questions about English grammar and usage, and complaints about how other people speak. They even called to have their own grammatical debates settled. This popular program, which ran from 2007 to 2014, was an excellent venue for promoting editors and editing.

"Karen Virag was a superlative friend and a singular woman. She had a great gift for inviting others to share her lifelong passion for language," said Durksen. "I am honoured and deeply moved to receive an award in her memory."

The Karen Virag Award honours heroes of editing—the individuals or organizations that champion our profession in their communities year after year. In their letter of support for Durksen, her nominators said, "Virginia absolutely glows when given an opportunity to speak in public, and her audience strongly responds to her enthusiasm and energy. The ‘editor's personality' generally involves avoiding the spotlight. Consequently, having Virginia in our ranks has been valuable: she is regularly out and about, telling people what editors do and why editors matter."

About Editors Canada
Editors Canada began in 1979 as the Freelance Editors' Association of Canada to promote and maintain high standards of editing. In 1994, the word "Freelance" was dropped to reflect the association's expanding focus to serve both freelance and in-house editors. As Canada's only national editorial association, it is the hub for 1,300 members and affiliates, both salaried and freelance, who work in the corporate, technical, government, not-for-profit and publishing sectors. The association's professional development programs and services include professional certification, an annual conference, seminars, webinars, guidelines for fair pay and working conditions, and networking with other associations. Editors Canada has five regional branches: British Columbia; Saskatchewan; Toronto; Ottawa–Gatineau; and Quebec/Atlantic Canada, as well as smaller branches (called twigs) in Calgary, Edmonton, Manitoba, Kitchener-Waterloo-Guelph, Hamilton/Halton, Kingston, Nova Scotia, and Newfoundland and Labrador.