Toronto, October 3, 2016—Nancy Flight of Vancouver, BC, is the winner of the inaugural Karen Virag Award, which recognizes exceptional efforts by an individual or organization to raise the profile of editing in their community. The award is named for a highly accomplished member of the Editors' Association of Canada (Editors Canada) who died in 2014. 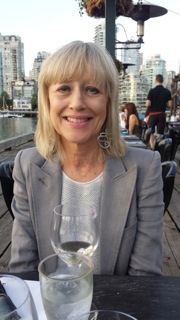 Flight, currently associate publisher at Greystone Books, has been editing books in Canada and the United States for more than 40 years. She is well known across Canada, not only for her work as the editor of award-winning books but also because of her presentations at conferences and service on national committees and juries.

"Although I have always loved editing books and working with authors, it has been a special privilege to share that love with students, newcomers to the profession and others," says Flight. "I am honoured and touched to receive this award named for Karen Virag. She was a wonderful person and a great friend of mine, whom I miss very much."

West Coast Editorial Associates stated in their letter nominating Flight for this award, "Nancy's very person shines a spotlight on editing. Like Karen Virag, Nancy is stylish, charismatic and striking: she says that editors, despite their invisible job, deserve to be seen."

Flight has edited such award-winning books as A Geography of Blood, by Candace Savage; Eating Dirt, by Charlotte Gill; and Trauma Farm, by Brian Brett. She has taught in the Simon Fraser University Master of Publishing program, where she was a Ralph Hancox Fellow, in the SFU Writing and Communications Program, and at the Banff Book Editing Workshop. She has also led workshops such as the Banff editing workshop. She is a past president of the Association of Book Publishers of British Columbia and of Editors Canada, and has served on the executive council of the Association of Canadian Publishers. She was the winner of the 1988 Tom Fairley Award for Editorial Excellence for her work on Genethics: The Ethics of Engineering Life by David Suzuki and Peter Knudtson.

The Encyclopedia of Literature in Canada lists Flight among the editors "whose patient toil raised the standard of Canadian publishing and who have been responsible for influencing the profession."

About Karen Virag
Karen Virag, a longtime member of Editors Canada's Prairie Provinces branch, was the association's director of publications from 2012 to 2013. She co-chaired the association's successful 2008 national conference in Edmonton and the production of Stylistic Editing: Meeting Professional Editorial Standards (2011). She represented Editors Canada for several years on the board of the Cultural Human Resources Council (CHRC). She was supervising editor at the Alberta Teachers' Association, and a freelance editor and writer. She regularly wrote book reviews for the Edmonton Journal and articles for The Tomato, a culinary magazine. She volunteered for Arts on the Avenue, an Edmonton community initiative, and along with Virginia Durksen was well known as one of the Grammar Gals appearing regularly on Alberta at Noon, a CBC Radio One call-in program.

Selection Committee
The members of the selection committee for the award were: Clare Cruickshank, Hamilton, ON, an editor with a background in accounting and mental health who will complete the Ryerson publishing certificate program in 2017; Anita Jenkins, Edmonton, AB, honorary life member of Editors Canada; Allen McAvoy, Toronto, ON, an editor with a background in journalism and public administration; and Betty R. Robinson, Toronto, ON, a senior developmental editor of school textbooks who has judged Editors Canada's Tom Fairley Award for Editorial Excellence and served on the association's certification steering committee.

Editors Canada began in 1979 as the Freelance Editors' Association of Canada to promote and maintain high standards of editing. In 1994, the word "Freelance" was dropped to reflect the association's expanding focus to serve both freelance and in-house editors. As Canada's only national editorial association, it is the hub for 1,500 members and affiliates, both salaried and freelance, who work in the corporate, technical, government, not-for-profit and publishing sectors. The association's professional development programs and services include professional certification, an annual conference, seminars, webinars, guidelines for fair pay and working conditions, and networking with other associations. Editors Canada has five regional branches: British Columbia; Saskatchewan; Toronto; Ottawa–Gatineau; and Quebec/Atlantic Canada, as well as smaller branches (called twigs) in Calgary, Alberta; Edmonton, Alberta; Manitoba; Kitchener-Waterloo-Guelph, Ontario; Hamilton/Halton, Ontario; Kingston, Ontario; Nova Scotia; and Newfoundland and Labrador.