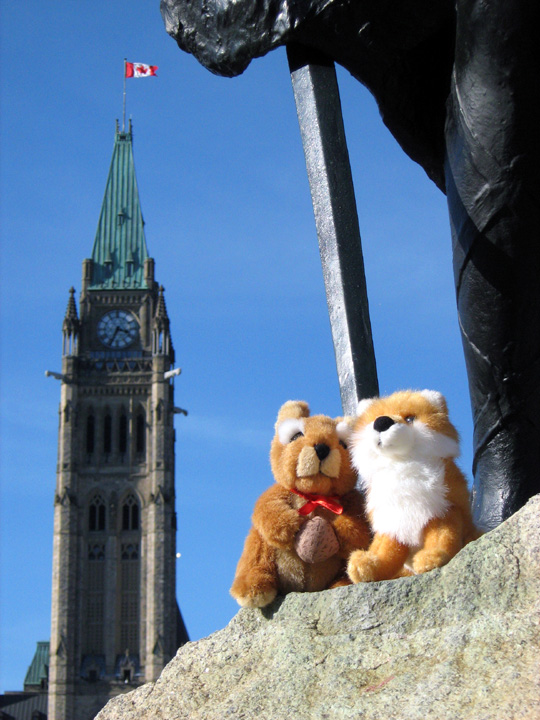 Any resemblance to humans, living or dead, is purely coincidental

Born and raised in Leduc, Squirrel worked in the book industry for years, all the while dreaming of one day attaining the coveted prize: a government badge, the symbol of a stable job with a pension. Finally, after years of saving and planning, she bought a one-way ticket and got on a plane heading east. Her struggle wasn’t over, however. It took a few years of freelance work before she got her chance. Against the odds she managed to get her paw in the door and has since carved out a role for herself as an editor in a department that touches the lives of all Canadians. Squirrel takes her job very seriously, and had become known in the department as the go-to person for all things wordy.

Fox was born and raised in Toronto before moving to Northern Ontario for high school, where she learned winter survival lessons that would serve her well in Ottawa. She arrived in the capital city nearly 20 years ago, coming for university and forgetting to leave. After training in journalism she turned to publishing, and worked various jobs, never lasting longer than two years. Eventually a bad job that just wouldn’t end pushed her over the edge, and she became a freelancer. It seemed she had finally found her calling. Fox thrived on the chase of the next contract, the hustle, the life of an artist on the edge. But after seven years, the lure of new skills was too much, and she agreed to be chained to a desk for a full year. When last seen, Fox was planning her big comeback and re-release into the wild.

Squirrel and Fox met at a monthly speaker night hosted by the local National Capital Region branch of the EAC. Soon after, Fox recruited Squirrel to help with the Ottawa conference, and these two word nerds have been going wild ever since.