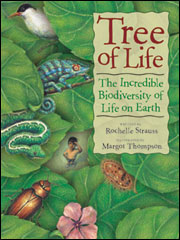 Rochelle Strauss. Tree of Life: The Incredible Biodiversity of Life on Earth. Kids Can Press, 2004.

TORONTO, June 17, 2005—The Editors' Association of Canada (EAC) is pleased to announce that this year's winner of the Tom Fairley Award for Editorial Excellence is Valerie Wyatt of Victoria, B.C.

Wyatt won for her work on Tree of Life: The Incredible Biodiversity of Life on Earth, by first-time author and environmental educator Rochelle Strauss. "Part of what was nice about getting this award," says Wyatt, "is the acknowledgement of the amount of editorial work that goes into children's books."

Wyatt should know, because she's been editing and writing children's books for almost 30 years. She has written 15 books and edited close to 150. Wyatt's major client is Kids Can Press, the publisher of Tree of Life. Wyatt considers herself fortunate to work with a company that allows her to be closely involved in all stages of a project, from the initial idea through to the finished product.

Editor-in-Chief for Kids Can Press Sheila Barry feels equally fortunate to have Wyatt as an editor. "She is a superb editor with excellent technical ability, but most importantly, she is completely engaged by her work, which allows her to engage people with whom she works." Barry notes that Tree of Life was a particularly challenging book because it involved a lot of complex information that needed to be made accessible to children eight years and older.

The three award judges, who are all members of the Editors' Association of Canada, commented on Wyatt's ability to bring her own ideas to the subject matter, while retaining the author's voice. "She has a great visual sense," noted judge Ian Coutts, winner of last year's Tom Fairley Award. "She is quite firm on some ideas, and she even sees them in a different way from the author. But the neat thing is that, even allowing for that, she is trying to serve the material, not take over the book for herself."

Tree of Life has already won several awards, including an Independent Book Publisher Award and a Green Earth Book Award, and is into its third printing.