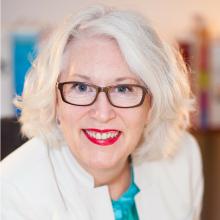 Sandra Gravel is the driving force behind the Programme d'agrément en révision linguistique – Réviseurs Canada (PARL), the country's first French-language editing proficiency program. Gravel has been integral at every stage of developing the program: from first leading the team that updated the professional standards on which the program is based (Principes directeurs en révision professionnelle) and overseeing test and study guide design, to ultimately launching the program in 2015. Amazingly, Gravel and the Editors Canada Comité Agrément/Principes were able to bring PARL from concept to execution in just two short years. Today, she continues to oversee PARL and hosts information sessions about the program in Quebec.

"I'm deeply touched that my role in launching PARL and my contribution to Editors Canada are being recognized," said Gravel in her acceptance speech. "This encourages me to continue working on this important program."

The members who nominated Gravel said, "Thanks in large part to [her] energy, enthusiasm and tireless efforts, French-language editors now have a way to evaluate their competence in editing and can earn recognition from Editors Canada. [The PARL program] is not only the first of its kind in Canada, it is unique in the world, further establishing Editors Canada in a leadership role when it comes to editing standards and editorial professionalism."

"I'm honoured and proud to receive this award," said Gravel. "I have been a member of the Editors Canada national executive council before and I cannot begin to measure the magnitude of this association. I sincerely appreciate the dedication of the many people who volunteer their time."

Benoit has always been fascinated by reading and writing. He likes playing with words to create a text that is easy to read and understand. "It must come from my father, who was a French teacher," he explains.

Together with the other members of the Comité Agrément/Principes (CAP), he spent almost three years updating the French-language editorial standards and setting up a French-language certification process, including the computerized tools to support the tests.

Benoit believes it's important to get involved in volunteering "to create connections with other members and to circulate ideas." He also received the 2015 President's Award for Volunteer Service.

His hobbies include going to the movies, walking and listening to country rock music. As to the future, Benoit would like to travel. Nashville and Memphis are on his list, along with Las Vegas, Great Britain, France and Germany.

Ellie Barton has been a dedicated member of Editors Kingston since its formation, and she took on a co-coordinator role when the twig faced a critical turning point. Attendance was low, and a proposal arose to disassociate the twig from Editors Canada and instead create an independent local group. Understanding the importance of remaining affiliated with the association but also the need to be a hub for local editors (both members and non-members), Ellie ran a follow-up meeting that affirmed the twig's connection to Editors Canada and set an open, positive tone. Working alongside her co-coordinator Nancy Wills and assistant coordinator Elizabeth d'Anjou, she then helped to revitalize the twig by establishing a web presence, exploring new publicity ideas, and planning and organizing meeting speakers and topics with wide appeal. As a result, meeting attendance has increased and twig membership is now steady. Ellie has been a driving force behind the positive changes in the twig, and she exemplifies Editors Canada's spirit of volunteering.

Ellie began editing in 2004 after working for 15 years in public relations for health-care organizations. She is a freelance editor who works on scholarly texts, fiction, memoirs and non-fiction in the humanities. She developed and teaches an online editing course for Queen's University.

A member of Editors Canada since 2010, Catherine Baudin is the president of La Quintessence, a language services business specializing in writing, editing and proofreading. A native of France, Catherine takes pride in having found her place in Quebec society. She is certified as a writer by the Société québécoise de la rédaction professionnelle, in addition to having 20 years of experience in editing and proofreading.

She has seen the editing profession evolve since the start of her career, but thinks there is "a long road ahead for it to be recognized as a true, independent profession."

It is thus not surprising that she became a volunteer member of the Comité Agrément/Principes (CAP). Her role on the committee included producing test-related documentation, such as study guides. She also contributed proofreading.

Catherine suggests that an individual volunteer can modulate their involvement by examining if certain tasks can be shared among several volunteers.

Her hobby is swimming. Catherine also enjoys reading, but admits that she "suffers from a professional impairment."

Catherine would like to continue her editing work as long as possible. "When you love what you do," she says, "you don't want to stop!"

Anissa Bouyayi began her professional journey as a translator before embarking on an international career in humanitarian development, which lasted for more than 15 years. In 2008, she turned to editing.

Today, Anissa works as an employment counsellor. She conducts workshops and helps job seekers by revising and editing their curriculum vitae and cover letters.

She joined Editors Canada in 2009 and became a volunteer in 2013. As a member of the Comité Agrément/Principes (CAP), Anissa contributed to developing the 2014 French-language version of editorial standards as well as editing and rewriting the agrément study guides.

Certified as a writer by the Société québécoise de la rédaction professionnelle, Anissa is proud of the role she played in the French-language certification process, which was launched in 2015. She sees the test as a genuine proof of quality for professional editors.

To Anissa, volunteering "is a real window on other realities and a good way to build a network." She adds, "You won't lose anything by getting involved."

As for her leisure time, she enjoys walking, meditating and relaxing.

Editors Saskatchewan chair Katherine Duncombe is being recognized for her dedication and leadership. Although the Saskatchewan branch is the smallest one in the association, being a part of the branch executive requires handling some big responsibilities. It can be challenging for a smaller group of people to meet all the expectations of a branch, such as meetings, professional development programs, and member recruitment. It became more difficult for the branch when the marketing and PR volunteer stepped down. Consequently, the executive members have been sharing the responsibilities, and Katherine has taken on much of the work. Katherine was understandably nervous to take on her new role as chair, but she has quickly become a leader.  On top of her chairing duties, she produces the branch's monthly e-newsletter, updates the website, and manages the social media accounts. Katherine credits Editors Canada and Editors Saskatchewan for helping her gain the skills to be an editor, and she views her volunteer work as a way to give back to all those people who helped her.

Katherine has been a member of Editors Canada for four years. Starting out as a part-time editor, she moved to freelancing full-time two years ago. Her specialty is web editing, and she copyedits and publishes articles for The Motley Fool Canada.

Marie-Ève Laroche has worked for 10 years as literary editor at a publishing house. In addition to her freelance editing services, she is a lecturer at the Université de Sherbrooke's Longueuil Campus, where she teaches manuscript publishing and editing.

A professional editor since 2001, she believes she owes a lot to Editors Canada. She secured her first novel editing contract thanks to her entry in the association's directory.

Marie-Ève has been a volunteer member of the Comité Agrément/Principes (CAP) for four years. She is proud of having contributed to launching the association's first French-language editing test. As a committee member, she worked on structuring the tests and reviewing the questions for the first test. She also served as examiner for the first roster of candidates.

Marie-Ève thinks one should dare to be come a volunteer. "It will make you grow!" she says. "You will gain new contacts, and it's really stimulating."

In her free time, Marie-Ève plays the transverse flute in a wind ensemble. "The brain is so busy with rhythms and nuances," she explains, "that one can't think of anything else."

Her dream is that her publishing and editing career will continue, with varied projects.

Anna Williams has been chosen for the President's Award for her excellent work as the Editor's Weekly managing editor. An Editors Canada member since 2007, she stepped into the managing editor role in December 2013. Her professionalism and considerable communication skills, talent and work ethic are in large part responsible for making the blog one of the association's most visible and positively received initiatives. Anna originally took on not just her role but all supporting tasks, such as handling technical matters and proofreading. She now works with a team of volunteers to ensure there is an article to post each Tuesday and that all content is interesting, readable and accurate. As a result of Anna's efforts, the blog's subscribers list has increased by over 300 readers.

Anna enjoys her work as managing editor and sees it as a great way to contribute to Editors Canada, enhance her professional experience, and network with other writers and editors. Before her work as managing editor, Anna oversaw the Editors Prairie Provinces job hotline, where she actively searched for and posted job opportunities. When not volunteering, Anna runs a freelance editing business specializing in business communications. She originally wanted to be an author and would like to someday revisit that dream.