Toronto, June 28, 2021—The Editors' Association of Canada (Editors Canada) has announced that Lindsay Hobbs of Minden, Ontario, is the recipient of the 2021 Claudette Upton Scholarship.

First awarded in 2010, the scholarship is a $1,000 cash award intended to support continuing professional development in editing. 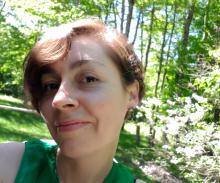 For Hobbs, books, reading and writing have always been passions. But it's the power of language that motivates her. "When I began to take my own writing seriously, I started to get interested in reading more critically, and also in interrogating my personal responses to written works. I learned that while some people may be drawn to books for the plot, or the characters or the settings, what draws me in is the use of language. Working with the flow of words really makes me happy!"

How can editors play a role in addressing racism and other systemic inequity, even when they come from a place of privilege?

In response to this year's scholarship essay question, Hobbs drew on that love of language and the power editors wield working with it. "One of the essential ways that editors can begin to transform unequal systems is to consciously rethink language as we work," she wrote. "Understanding what language is appropriative, is culturally misunderstood, or has derived from oppression, is crucial to the future of editing."

"Editors who come from a place of privilege must be constantly learning, and actively seeking out avenues to engage with diverse authors and thinkers. We must accept critical and constructive feedback on how we can do better, because that is a part of this process. There must be a willingness to learn and ‘unlearn,' and an open and empathetic participation in the discourse of change."

The selection panel for the 2021 Claudette Upton Scholarship commended Hobbs for her commitment to education and growth. "[Hobbs] showed insight on not only addressing and acting on racism and systemic inequity as editors, but also on it being a continuous process, and how important it is to be proactive in our own education and move outside our comfort zones, reaching out to engage with authors from diverse backgrounds," said one judge. "She is lining up all the ingredients for becoming a good, open-minded and flexible editor."

Like most editors, Hobbs has passions and pastimes beyond reading. She was a yoga teacher for 10 years and spent some happy years working in a cheese shop ("which is extra strange, as I am vegan," she said). She also loves singing in choirs and anything with an absurd sense of humour. She hosts a podcast about books and can be found endlessly letting her three cats in and out of the house ("which almost qualifies as a full-time job").

"Receiving the Claudette Upton scholarship is a great honour," said Hobbs. "I did not know Claudette Upton, but reading about her makes me smile, and I very much believe in the causes that were close to her heart, such as social and environmental justice. I am grateful for the financial aid received through this scholarship, which is enabling me to pursue professional development that would otherwise not have been an option."

Julia Cochrane has been a freelance editor, specializing in math and science, since 1995 and a member of Editors Canada since 1996. She lives in Wolfville, Nova Scotia, with her husband and three cats.

Traci Williams has worked as editor and translator for over 30 years, specialized in the medical, technical, financial and legal fields. She has been a member of Editors Canada for over 20 years. She lives in Montreal, Quebec, with her husband and requisite cat.

About Editors Canada
The Claudette Upton Scholarship is an annual national award that recognizes a promising emerging editor. The award is named in memory of Claudette Reed Upton-Keeley, a gifted editor who loved the English language and was actively involved in social justice and environmental causes throughout her life. She is remembered for her wonderful sense of humour and her sharp mind.

Additional information about the Claudette Upton Scholarship is available on the Editors Canada website.

Editors Canada began in 1979 as the Freelance Editors' Association of Canada to promote and maintain high standards of editing. In 1994, the word "Freelance" was dropped to reflect the association's expanding focus to serve both freelance and in-house editors. As Canada's only national editorial association, it is the hub for 1,300 members and affiliates, both salaried and freelance, who work in the corporate, technical, government, academic, not-for-profit and publishing sectors. The association's professional development programs and services include professional certification, an annual conference, seminars, webinars, and networking with other associations. Editors Canada has five regional branches: British Columbia; Saskatchewan; Toronto; Ottawa–Gatineau; and Quebec, as well as smaller branches (called twigs) in Atlantic Canada, Barrie, Calgary, Edmonton, Hamilton-Halton, Kingston, Kitchener-Waterloo-Guelph and Manitoba.